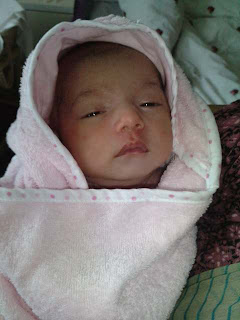 In my Eid post I mentioned that my baby cousin Ahdia was ill and I asked if you could all make du’a for her to get better. This post is an update on her condition and how much this 2 month old baby has taught me.

When Ahdia was born she was just another ordinary healthy baby girl Alhamdulillah, however, about a week after her birth my aunt and uncle realised that something was wrong with little Ahdia and took her to hospital.

Ahdia was not crying and seemed to be sleeping an awful lot, her body was limp and wasn’t reacting to any stimulation like a healthy baby would. When I changed her clothes she didn’t even move, she didn’t curl up or tense her muscles like you would expect a normal baby to when you take off their clothes.

The doctors couldn’t find anything wrong with her because after they fed her through a tube, going from her nose to stomach she seemed to be getting better. We all assumed that she was just dehydrated, which is why she had no energy to cry or even open her eyes.

A week after she came back from hospital she started having seizures (like epeleptic fits) again she was taken to hospital.The doctors at the hospital couldn’t figure out why she was having the seizures, she had an MRI scan of her brain and there was nothing majorly wrong with the scan. All her tests came back normal and she looked like a healthy baby. Ahdia was then put on a ventilator as her breathing was being affected by the seizures. The poor baby couldn’t even open her eyes as the stimulation from the light also triggered her seizures. She was tied to tubes and was being injected to control her breathing, eating and the seizures.

For 2 weeks she remained in hospitals with the doctors keeping an eye on her condition, we were told that the reason why she was on a ventilator was because her body was able to take in oxygen but not get rid of the carbon dioxide, therefore the carbon dioxide was building up in her body, making her sleepy and the carbon dioxide in her brain could be the reason why she was having the seizures. As days went by baby Ahdia wasn’t getting any better, her condition deteriorated so much that she was transferred from the intensive care unit in one hospital to the intensive care unit in Great Ormond street hospital (a well known children specialist hospital).

At the hospital more tests were carried out and the doctors found out that she has a very rare disorder called ‘non-ketotic hyperglycinemia’ this disorder is an autosomal recessive metabolic disorder characterized by abnormally high levels of the amino acid glycine. Glycine acts as a neurotransmitter, which is a chemical messenger that transmits signals in the brain.
Glycine encephalopathy is caused by the shortage of an enzyme that normally breaks down glycine in the body. A lack of this enzyme allows excess glycine to build up in tissues and organs, particularly the brain, leading to serious medical problems.

The doctors told us that her condition was very serious and that it was very unlikely she would survive. When I heard this I did a bit of research and found out more about the disorder. She had all the symptoms I read about, lethargy, uncontrollable seizures, low muscle tone, apnea. The disorder is a genetic one meaning both my uncle and aunt are carriers of the gene but are not effected by the disorder, however the child has both of the carrier genes and therefore has the disorder.

After a meeting with doctors my uncle and aunt were told that the doctors wanted to turn her ventilator off and that she would roughly be able to breathe on her own for only 12 hours. When I got the message I broke down in tears and rushed out of work to go and see her. As soon as I saw her tears started streaming from my eyes, how could this tiny baby who had only come into this world and looked perfectly normal be dying? I couldn’t believe it, but we all accepted the fact that whatever was happening was happening by the will of Allah.

That day I stood there and watched my baby cousin in a coma (she just looked like a baby sleeping very peacefully) so many thoughts ran through my mind. I couldn’t understand how my aunt and uncle were holding it together so well (because I was really struggling to do so myself). My aunt stood on the other side of her cot and was stroking her hair and her hands, and told me about how she felt when she was pregnant with my cousin. She wasn’t very practising before she was pregnant but while she was pregnant she always had the urge to go and pray. She didn’t want to watch TV and the music channels she used to. She didn’t want to answer the phone or speak too much to anyone because she felt like she was just going to end up gossiping so she kept away from it. All she wanted to do was pray, read the Quran and sleep. She told my uncle that she had a feeling that the baby was going to be a pious Muslimah and that she wanted to encourage her to study Islam when she grew up, as a lot of guys do my uncle just laughed it off (probably thinking its all the hormones talking).

That conversation brought tears to my eyes because all I could think of was how my aunt must be feeling. Imagine carrying a baby inside you for 9 months, going through the morning sickness, the swollen ankles, the tiredness and stress of pregnancy, but enduring it all because you will have a beautiful baby to look forward to. Then imagine going through the pain of childbirth, but enduring it all because you know Allah is blessing you with a bundle of joy. Now imagine spending only a week with that baby, bonding with her and then having to see her in pain, having seizures, difficulty breathing, being poked and prodded and injected, shifted around and then told she is going to die. Every mothers worst nightmare.

Whilst at the hospital that day the baby had to have a cannula put into her foot. As the nurse tried to put the needle in her foot Ahdia moved and responded to the pain. When the needle didn’t go in the nurse tried again, but this time as soon as the nurse touched her skin with the needle she pulled her leg out of the nurses hand and by the time the nurse had put the needle in (after 4 attempts) she had tears falling from her eyes. That’s when we realised that she is well aware of what was going on even if she is in a coma and her brain isn’t functioning normally. That’s when I realised that my little cousin is a fighter mashaAllah.

The doctors switched her ventilator off on Sunday and we all thought that she would stop breathing pretty soon after that, so all our relatives went to see her (thinking it would be the last time). My grandmother wasn’t told that the doctors had said the baby wasn’t going to survive because she is very old and fragile, so when she went to see her on that day she was told the full story, Alhamdulillah although she was sad she took it quite well, as did most people. I was just glad to see that everyone understood whatever was happening was happening by the will of Allah (even the doctors).

When the doctors told us that she wasn’t going to survive for more than 12 hours I really believed them, but this little baby girl reminded me that if Allah wills anything can happen and nobody knows that time when someone is going to die because that is up to Allah alone.

It has now been 4 days since her ventilator was switched off and Alhamdulillah she is still doing well, breathing n her own. Because her condition is very severe it is unlikely that she will ever come out of her coma and open her eyes and if she does past studies show that she will be severely mentally retarded. However, we are all still praying for a miracle and I urge every single person reading this to make a prayer for her and her family.

If a child dies before the age of puberty he or she will go straight to heaven. On the day of judgement that child will pull his/her parents towards heaven and ask Allah to grant them a place in heaven also.

Thinking about Ahdia has made me realise that there are so many things that can go wrong during a pregnancy, childbirth and beyond that which is out of our control, so every child that is born healthy and survives by the will of Allah really is a blessing. Many parents complain that their child isn’t as bright as someone else’s or as tall or as fair or as well behaved, but times like this make you realise that every child is different and perfect in their own way Alhamdulillah.

Ahdia came into this world to remind us all that we are not in control of our lives and we should always put our complete trust in Allah. She has got my uncle and aunt and other family members praying their salah and making constant du’a. As she sleeps, her face glows and there is a vibe being emitted from her that makes us all remember Allah, put all our faith in Him and bring us closer to Him.